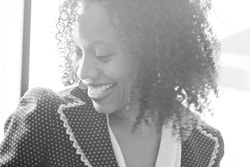 Nehassaiu's first book-length collection of poems, Music for Exile, has been selected by Tupelo Press, publishers of Ilya Kaminsky's Dancing in Odessa, Aimee Nezhukumatathil's Miracle Fruit and Lucky Fish, fellow Cave Canem poet Amaud Jamal Johnson's Dark Town Follies, and the new English translation of Pablo Neruda's Canto General. Nehassaiu is thrilled to join the ranks of this award-winning independent press.
Music For Exile will be available February 2021.
To Learn More About Music for Exile
To Visit Tupelo Press
Tupelo Press Editors' citation for Music for Exile
In Music for Exile, Nehassaiu deGannes takes as her central question the relationship between language and the body.   “I was reading again.still reading / and writing Trying to get at / family connections: uprootings / displacement,” she tells us in the opening piece. As the work unfolds, deGannes reveals – in writing as evocative as it is performative – the violence, injustice, and suffering that are embedded within the very foundations of grammar itself.  “It’s been a long time Girl,” she writes, "A long time but it seems we’re all traveling / the circumference of a creole skirt
/ Her spinning scatters us so.” Like Helene Cixous, Luce Irigaray, and Julia Kristeva, who attempted to write against, in spite of, and beyond a grammar that was hostile to them, deGannes invokes the rhythms of the physical body – that “dance,” that “breath echoing at the source of our hand” – until at last “we are singing.” “Come. Look,” deGannes beckons us, “Clem’s open mouth is a bell. This house is a church.” As incisive as they are lush and lyrical, these poems will open your eyes, and make you believe in the power of language to do necessary political, spiritual, and philosophical work.

IN A SUMMER OF
INCREDIBLE LOSS... EVERYTHING STAYING THE SAME...
& SO MUCH NEEDING TO CHANGE...

WHAT'S IN A NAME?
Rhode Island is "moving to change" its official state name.
No more "And Providence Plantations?"
I once called The Ocean State home & upon arrival, was struck
by... well, you know, the name, so I wrote about it:

I kept dredging what the name hinted at in poems and a solo-show. May this name change be a healing, a reckoning, an evolution... and not an erasure Nor glossing over of
Rhode Island's role
in the trans-atlantic trade in enslaved BLACK humans.
Did you know?
More enslaved Africans entered the Americas through the ports of Rhode Island... than any other American Colony.

Other honors include the 2010 Inaugural Cave Canem Fellowship to the Vermont Studio Center, the 2008 Poetry Fellowship from The Rhode Island State Council on the Arts, and grants from The Rhode Island Foundation, RISCA, Rhode Island Council on The Humanities and NEFA for her original solo-show Door of No Return, developed and produced in collaboration with Rites and Reason Theatre & Brown University.  Door of No Return has also been presented by Wheaton College, Portsmouth Abby, Goddard College, by the City of Cambridge, The College of Staten Island (CUNY,) Syracuse University, John Drew Theater, Shakespeare & Co., and The South Street Seaport Museum, NYC. Other fellowships and residencies include Community of Writers, Marilyn Nelson's Soul Mountain Retreat and Cave Canem.  Her book-length poetry ms. was previously named a semi-finalist for Fordham University's 2012 POL Book Prize.

Nehassaiu with members of The Dark Room Collective, including founders Thomas Sayers Ellis and Sharan Strange, and U.S. Poet Laureate Natasha Tretheway.  This stellar evening launched a 2012-13 reunion tour which gathered alums of the Dark Room for readings in Chicago, DC, New York and Boston.